New Stadler trains for the Tyne and Wear Metro reach another significant milestone, with start of production of the first bogies 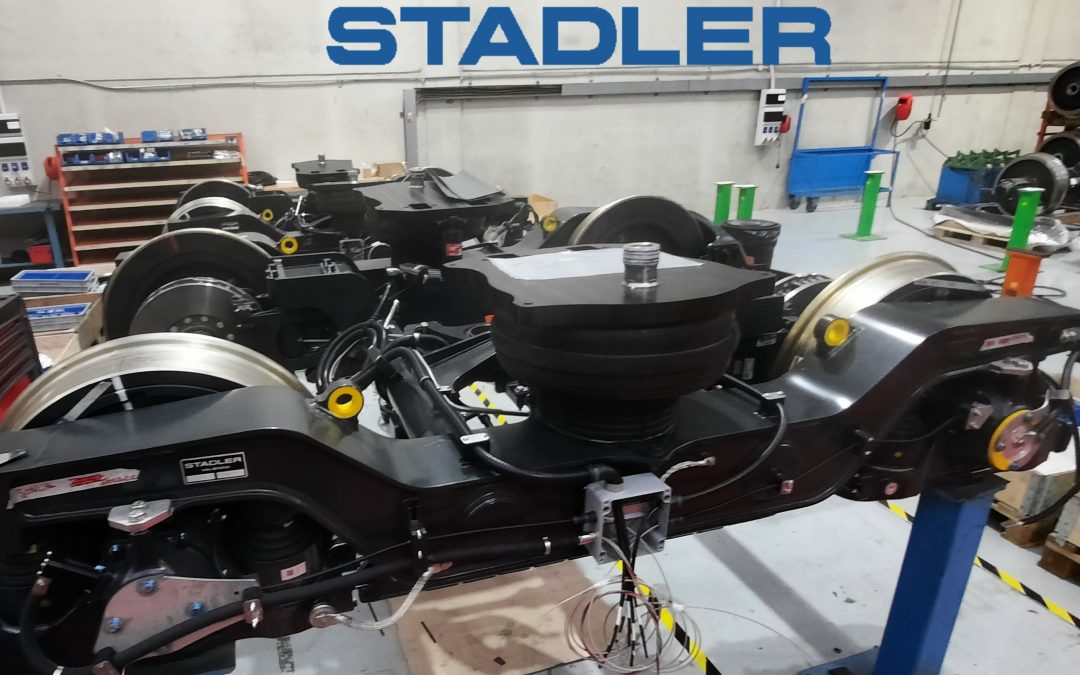 Just over two years since Stadler and Nexus signed the contract for 46 new trains for Tyne and Wear Metro, the manufacturing process is well under way and the process to build bogies — structures with wheels attached that carry the bodyshells — will soon begin in earnest. Stadler is about to start making the bogies for the fleet that it is supplying and delivering to Nexus, set to operate on the Tyne and Wear Metro and entirely replace the legacy trains. The first train is scheduled to arrive in the north east for testing at the end of this year.

The production of the 276 bogies, six for every train, is taking place in Valencia, Spain. It follows the stage known as final assembly, which involves fitting the main vehicle components, including the wheels, seats, windows and flooring. Final assembly is continuing and began in December 2021.

All bogies for the first vehicle will be attached to the bodyshells within the next couple of months, in a process known in the rail industry as the ‘marriage’. Claudius Oblasser, project manager for Stadler, commented: “Despite the challenges posed by currently geopolitical events and their implications for global supply chains, Stadler is very pleased to be on the cusp of bogie production. Once these bogies are ready, all the fundamental components will have been built, and while much remains to be done before the trains are complete, I believe this stage demonstrates that real progress is being made, ahead of the rigorous programme of testing, set to kick off this summer.”

Head of fleet and depot replacement programme at Nexus, Michael Richardson, said: “It’s great to see that yet another big milestone has been achieved in the production of the new Metro train fleet. “This latest phase will involve the production of the bogies – structures with the train wheels attached, so it’s a very important part of the overall build process that Stadler is undertaking at the moment. “We are looking forward to seeing the new trains take shape over the coming months, and it will be exciting to see the first one arrive here in the region at the end of this year for testing and training ahead of going into full service in 2023.

“The new Metro trains are going to transform the network for our customers and for our staff. The Stadler trains will be more reliable, more modern and more energy efficient. They will deliver a step change in quality and comfort.” Stadler is building a total of 46 new Metro trains for Nexus, which will be delivered up to 2024. The contract, signed in February 2020, includes a new maintenance plant, which is currently being built and a 35-year maintenance programme, underscoring Stadler’s long term commitment to the north east.

The Swiss rail builder has pledged to support the regional economy and involve as many Tyne and Wear-based companies in the project as it can. It is using local suppliers for materials and services required for the depot re-build, the manufacturing of the new trains and the ongoing service and maintenance of the current trains. The new Metro trains, which will be 15 times more reliable and will cut energy consumption by 30 per cent, will have modern features including charging points, and air-conditioning. Among the new features will be an automatic sliding step at every door of the new trains, making travel easier for Metro’s 50,000 wheelchair passengers as well as people with push-chairs, luggage or bicycles.