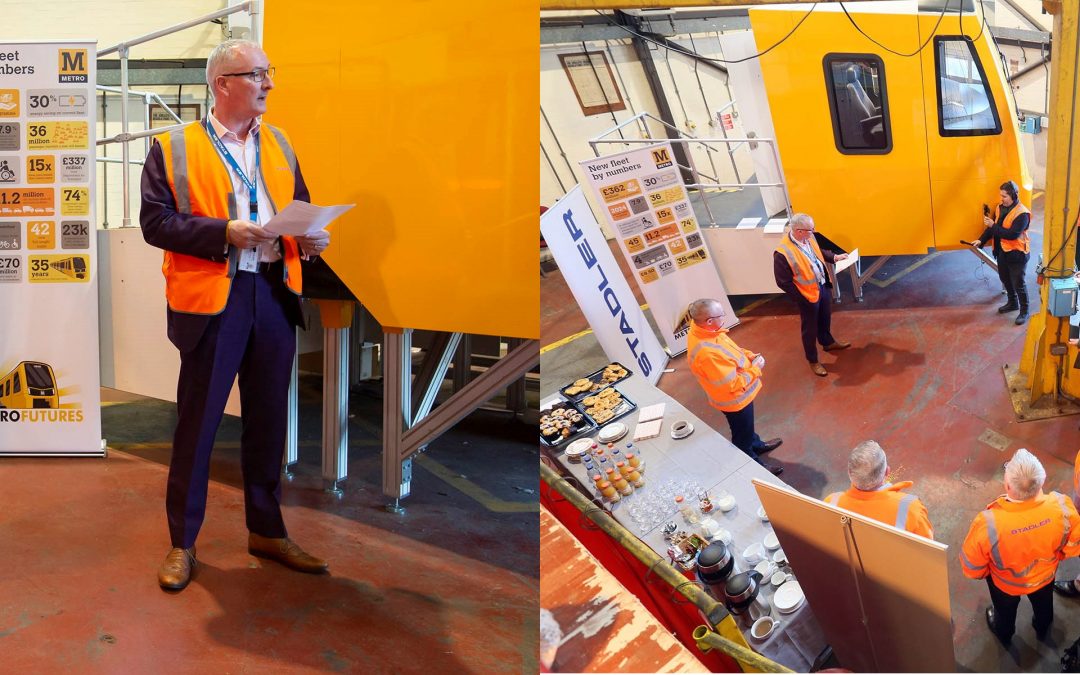 The first phase of the £70m project to rebuild Gosforth Metro depot has been completed, paving the way for the further demolition work on the site, and the construction of a state-of-the-art facility to house the new Metro train fleet. The opening phase of the project has involved the partial demolition of the 100-year-old depot, the installation of new train stabling track and overhead lines. Stadler, the Swiss train manufacturer, which is building the state-of-the-art depot and supplying a fleet of 46 new trains on behalf of Metro operator, Nexus, will now start work on the new depot buildings, and demolish more of the old facilities over the coming months. The first phase of the project included ground works, the partial demolition of the main depot buildings, and the removal and renewal of train stabling lines on the site. The second phase will see train stabling sheds to the west of the depot taken away. The final two stages of demolition will be in 2022. The building work has been configured to enable the current Metro fleet to continue operating from the Gosforth depot, while construction work takes place. Nexus is also using a smaller temporary train depot at Howdon while it transitions to the new facility at Gosforth.

Volker Fitzpatrick is building the new Gosforth depot on behalf of Stadler. Rob Baxter, managing director of Stadler Rail Service UK, commented: “This is a hugely ambitious project, taking place in an area of the country with a strong railway heritage. Although work to build a new depot only started last year, I am delighted that great progress is being made, with the site really taking shape. “Partners involved in this project are working together closely and effectively to manage this complex construction challenge. With the new sidings now ready, it’s already beginning to look like a home for the brand new trains arriving from next year.” Chief operating officer at Nexus, Martin Kearney, said: “Great progress is being made with our new £70m Metro depot at Gosforth, which is going to house the new Metro train fleet. “I’m pleased to say that the first phase of this transformative project is complete, on time and on budget, paving the way for further demolition work of the 100-year old depot building on site, and the start of the construction of the new depot facility. “We can look forward to seeing the first new Metro train arrive at this state of the art facility at the end of next year. It is a historic project, which secures a very bright future for the Tyne and Wear Metro, as well as benefiting the local supply chain. “Stadler has already begun manufacturing the new trains over in Switzerland and by 2023 we will have the first new train in full service, following a period of training and testing. The new trains are going to transform the quality of services we can offer our customers.” The Gosforth depot site covers 12 acres and is located close to Regent Centre station in the suburbs of

Newcastle. The new depot will comprise inspection roads and pits, cranes, jacks, test facilities, automatic train- checking equipment and a wheel-lathe. Other features include a wash-plant to clean train exteriors and other dedicated areas for both daily and periodic deep-cleaning. The outside area is being adapted to optimise train movements, while keeping noise to a minimum for the benefit of local residents. The new facility has been designed to ensure maximum availability and reliability of the fleet for decades to come. It will vastly improve the working environment and become home to a wide range of activities, including preventative and corrective maintenance, overhauls and train presentation. There will be storage for spare parts and material supplies and office space for training and support functions. The building will promote sustainability, providing an attractive environment for employees. It will make best use of natural light, and all work spaces will have windows. Energy efficient lighting will be installed throughout the premises and solar panels on the roof will reduce overall energy consumption. Water recycled on site and rainwater will be harvested and used for train washing facilities and toilets. There will be a dedicated, secure area for bikes, and showers will be provided for people cycling to and from work. Charging bays for electric cars will be installed.

Stadler has pledged to support the regional economy and involve as many Tyne and Wear-based companies in the project as it can. It is keen to use local suppliers for materials and services required for the depot re- build, the manufacturing of the new trains and the ongoing service and maintenance of the trains on the patch.

More than 90 per cent of the suppliers used for the depot build project are based in the UK, with key suppliers from the north east region, including Thompsons of Prudhoe and A&M Electricals in Washington. Stadler is building a total of 46 new Metro trains for Nexus, which will be delivered up to 2024. The new Metro trains, which will be 15 times more reliable and will cut energy consumption by 30 per cent, will have modern features including charging points, air conditioning and a step-change in accessibility. Among the new features will be an automatic sliding step at every door of the new trains, making travel easier for Metro’s 50,000 wheelchair passengers as well as people with push-chairs, luggage or bicycles