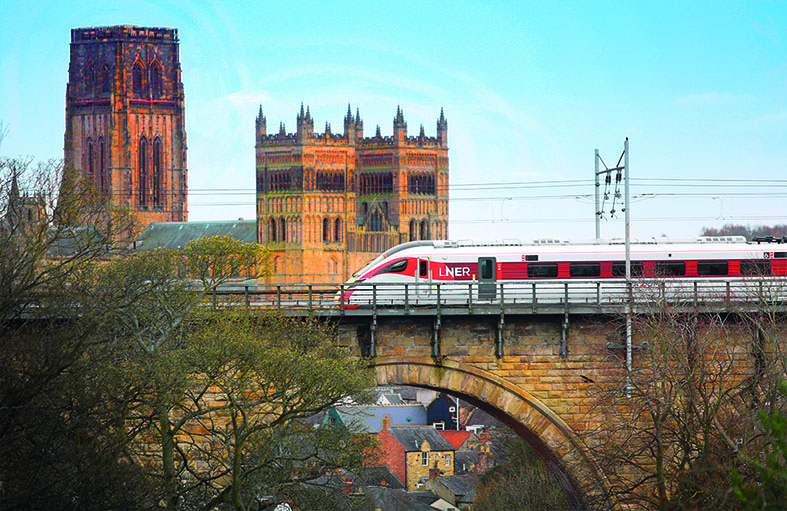 New high-speed trains built in the county came home when an Azuma stopped at Durham for the first time.

Hitachi – which this week won a new contract worth £400m to the site – relied heavily on the local supply chain for the construction of the Azumas with 70 per cent of the parts fitted for the trains coming from within a 40 mile radius.

The Azumas are being rolled out across the UK over several months having entered service in May.

Last week marked the first voyages of the trains through the county in which they were built, when an Azuma stopped at Durham station for the first time.

Waiting to greet the train were representatives of Durham County Council, Hitachi and LNER station staff.

Cllr Joy Allen, the council’s Cabinet member for transformation, culture and tourism, said: “We are absolutely delighted to welcome the Azuma home to County Durham.

“It’s a source of immense pride that this wonderful feat of engineering has been proudly pieced together here by the highly skilled team at Hitachi and that 70 per cent of the parts they used came from within a 40 mile radius.

“The story of how these trains were built is proof that County Durham really is Powered by People.

“We look forward to this great work continuing with Hitachi’s new contract and the boost this will bring to our economy by supporting so many jobs.”

Terry Collins, the council’s chief executive, added: “The fact we now have high-speed trains serving the county will be massively beneficial in a number of ways.

“By strengthening our existing transport links, including by reducing journey times to London and Edinburgh, the new trains will be vital in attracting and retaining top class employers and supporting our residents’ travel requirements.

“The Azumas will also bring many more visitors to our county to enjoy attractions like the World Heritage Site Cathedral and Castle – one of the most admired views on the rail network – and events such as Lumiere.

“We look forward to the new trains becoming a regular sight at Durham station.”

Ross Nagle, chief operating officer for manufacturing at Hitachi Rail said: “It’s fantastic to see the new intercity Azuma trains in passenger service on the East Coast Mainline travelling through our region. They are going to transform the passenger experience for thousands of people through more seats, more journeys and better reliability. We are incredibly proud to be building these state-of-the-art trains in County Durham where we have a fantastic local workforce and an ever-growing network of regional suppliers.”

David Horne, LNER managing director, said: “We are proud to be launching our new state of the art Azuma fleet of trains into service here in the North East of England. Our Azuma trains, built in County Durham, will help LNER revolutionise travel on the East Coast route and truly transform the experience for each and every one of our customers.”

The arrival of Azuma to County Durham comes just after Hitachi won the contract to build trains for the East Midlands Railway. A total of 165 carriages will be constructed at the Newton Aycliffe site.